Paxful.com – A P2P network for the “normal people”

Paxful, the “Uber of Bitcoin”, was founded in the summer of 2015 by Ray Youssef and Artur Schaback. The company is based in 3422 Old Capitol Trail, Wilmington, Delaware. It became widely known in that same year after they helped sex workers to accept Bitcoin as payment system after Visa and Mastercard stopped lending their services to Backpage.

The site is a P2P Bitcoin buy/sell site, similar to LocalBitcoins, where anyone in the world can trade fiat for Bitcoin or viceversa. The only exception and jurisdiction where they cannot operate is the state of New York as they do not have the required BitLicense.

Even though the site is not focused on a specific region, some countries like the USA, China, Nigeria, India and Russia are highlighted in their homepage, in “How to buy Bitcoin in …” sections.

Setting up an account on the site is easy and can be done in two ways: automatically, after providing an e-mail not yet registered in their database during the checkout in a buying process or, by filling directly the registration form available on their website. Besides clicking the confirmation link sent to the registered email, users are also asked to set two security questions.

Users can alternatively verify their mobile phone number and activate SMS notifications. While they can opt for being notified of a broad range of activity related to their account via email, only alerts about critical movements are sent via SMS. 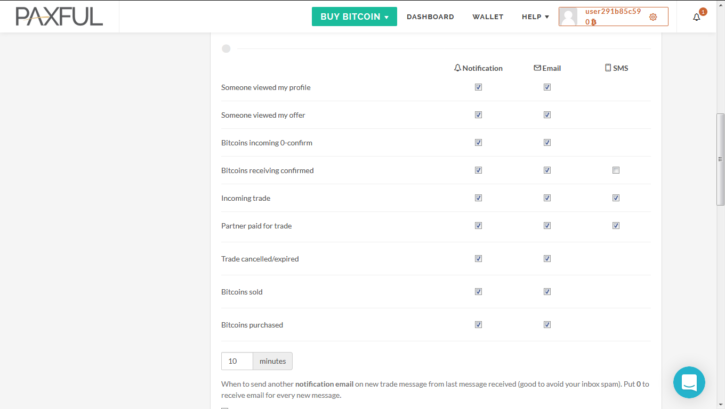 Notifications sent via email are not encrypted and they even send passwords as plain text. An automatically assigned password is given to users that register as they buy Bitcoin (providing just their email address) and they are not forced to change it after they first log in.

How selling works on Paxful?

The minimum amount that the site allows any vendor to offer is 0.001 BTC, no matter their verification level. The site charges a 1% fee on any sell, taken automatically from the user wallet and sent into escrow along with the amount to be bought by a client during a trade.

The site has an internal reputation system that allows users to rate their experience with each other during a trade. Once a particular vendor has reached 50 trades with more than 20 different partners, he can apply to become a verified vendor if he has high responsiveness and his success score is over 33%.

The feature is only available to Americans, Canadians, Australians and Europeans. The verification process takes up-to seven days and the requirements have had slight changes since the platform launch. To read more about the process, check the corresponding entry on the Paxful knowledge base, here.

How buying works on Paxful?

Technically, a user can buy with any currency and pay with a wide variety of methods ranging from bank transfers and credit / debit cards to a broad number of gift cards and cash deposits. Perhaps, in practice, since the site works in a P2P fashion, there are not offers for all the possible combinations. As an example, a quick search for offers in Fijian Dollar or Korean Won yielded no results. 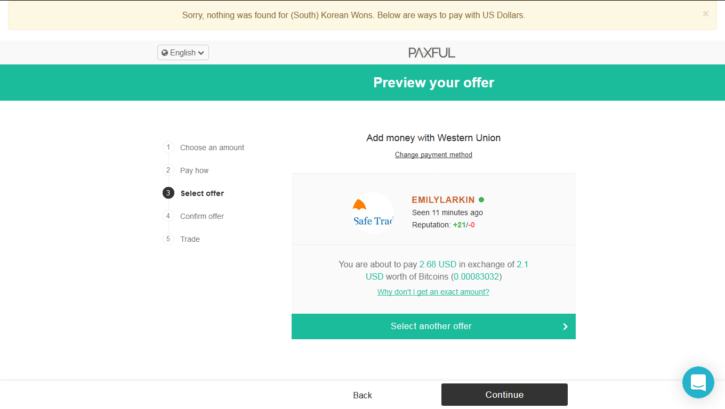 There are no offers for KRW, I did not see that coming!

While the site is open to buy with any currency, only Bitcoin may be sold. There are no fees for the buyer, but it should be taken into account that for uncommon payment methods the conversion rate is usually far lower than the market price, which in other words means that the buyer pays a commission to the seller. 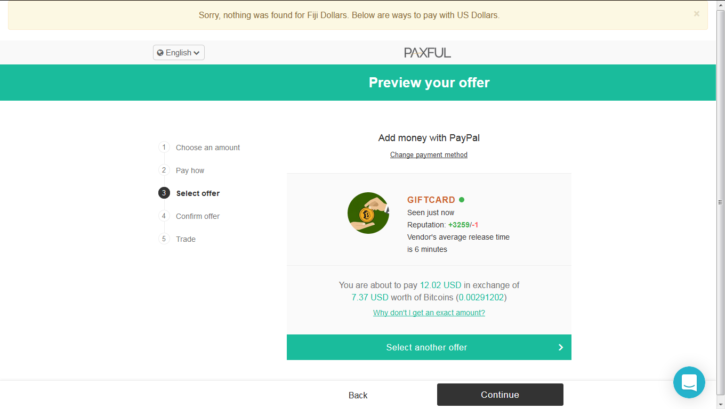 As we were not able to buy with FJD, we received this generous offer: receiving barely 61% of what we would pay in USD.

The interface of the website is clean; it adapts smoothly to any screen size and offers an intuitive distribution of the options and a minimalistic menu. 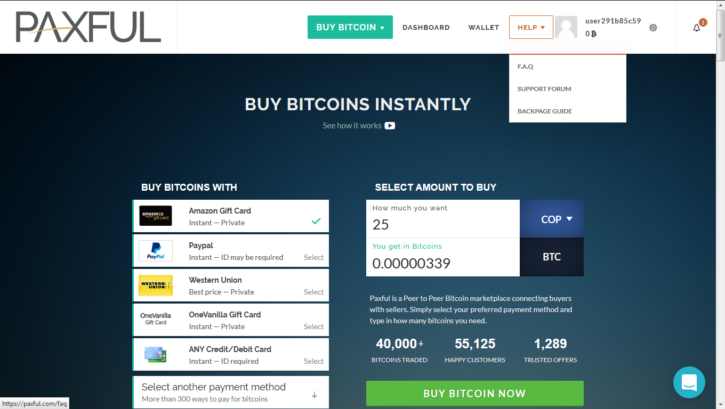 The Help section is clearly visible, within which a relatively comprehensive FAQ is included. Additional aids for the user include a support forum and a 24/7 live chat.

Threads on the forum receive replies often and the forum itself seems quite active, perhaps some of the answers are not as relevant as one would want.

Regarding the chat, while a small caption indicates that replies take 10 minutes on average, we tried contacting customer support and had to wait exactly 47 minutes to be assisted by a representative. Once in the chat room, each answer took between 4 and 7 minutes, not exactly what one would expect in a “live” chat. 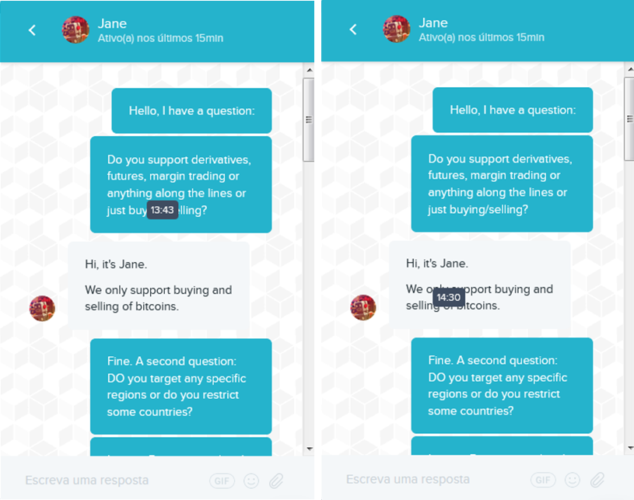 One particular thing about the Paxful forum is that it is full of scam accusations against other users. Not so long ago, someone posted a thread warning about the modus operandi of those scammers, on Bitcointalk.

On Bitcointalk there are also some accusations against the site itself that claim funds to have disappeared from wallets with no reason given by customer support; here is one started by Legendary user kashish948, and a second one by the also Legendary irfan_pak10, both active members of the forum. On one of those threads someone suggested it was BitGo’s fault, yet the reputation of Paxful seems to be mixed.

As a strategy to improve their image, Paxful added a “reviews” section to their site where positive reviews from their own users are highlighted. The page is just another testimonial page, whose credibility is no higher than that of the company itself.

How Paxful protects its users?

Paxful suggests to its users to set up 2-factor authentication and particularly recommends using Google Authenticator. Authy and SMS verification might be alternatively enabled to add a second protection to one’s account.

Below the 2-FA configuration instructions all active logins are listed and the last 20 actions performed by the user, shown.

As it was mentioned earlier, during a trade the Bitcoin is sent to an escrow and manually released by the seller once he has confirmed that the payment was received from the buyer. Paxful partnered with BitGo in order to secure its hot wallet by using multi-sig.

There are no reports the site been ever hacked, but one of its founders was recently arrested on weapons and drugs charges, according to Cointelegraph.

Paxful is a fair alternative for “normal people” to buy and sell Bitcoin, they became known thanks to a particular niche and have been loyal to their vision.

Go to paxful.com
Share your Experiences about Paxful.com:
46 User-Reviews for Paxful.com
Paxful.com Review 2020 – Scam or Not? Paxful.com
Review: "Paxful.com Review 2020 – Scam or Not?" by Best Bitcoin Exchange Staff, written on 8. January 2019
Paxful.com – A P2P network for the “normal people” Paxful, the “Uber of Bitcoin”, was founded in the summer of 2015 by Ray Youssef and Artur Schaback. The company is based in 3422 Old Capitol Trail, Wilmington, Delaware. It became widely known in that same year after they helped sex workers to accept Bitcoin as […]